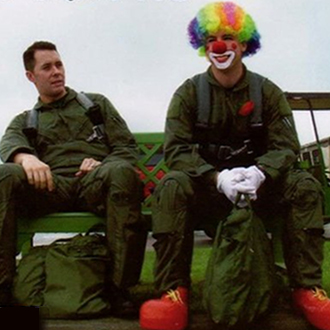 Proof that the American military is full of Bunny Ears Lawyers.
"Being a fighter pilot is a privilege and an honor. It is fun and it is stressful. And the difference between a bunch of guys who fly fighters and a group of shit hot fighter pilots flying in the world's best fighter squadron is camaraderie. And I can't think of any better way to build camaraderie than by singin' songs, drinkin' booze, and telling stories at the bar on Fridays."
— Chris Kurek
Advertisement:

Dos Gringos is an American folk rock band, whose two members (Chris "Snooze" Kurek and Rob "Trip" Raymond) are F-16 fighter pilots of the United States Air Force. Together, they're trying to keep the tradition of the "fighter pilot song" alive.

Dos Gringos' origin starts at Luke Air Force Base, where Chris Kurek was first exposed to fighter pilot songs during his training. The instructors had the students sing a song at the bar on Friday nights—but it eventually became apparent that most of these songs

were from the Vietnam War and didn't have much relation to the things a modern USAF pilot experiences. That inspired Chris to start writing his own.

Later, Chris befriended Rob Raymond on their first base assignment after training. Rob's talent with the guitar was just what Chris needed, and the two started playing together at nearly every squadron function. Eventually, when asked what the name of their band was, Rob impulsively said, "Dos Gringos!" Though Chris was initially concerned that they might get mistaken for a mariachi band, the name's stuck.

If you're planning on checking these guys out, though, be aware—most of what Dos Gringos does are Bawdy Songs full of audacity. Suffice to say, these guys wouldn't be work safe to listen to at a lot of places. Second, as they were written for the fighter pilot community (and associated personnel), their songs will sound like a second language to civilian listeners, unless they know quite a bit about NATO brevity code, fighter pilot slang, and USAF jargon. Well, except for the profanity. That's a universal language.

Even though their tours and album-making are severely limited by being active duty pilots, they've become quite popular in the U.S. Air Force, other branches of the American military, and even with other national militaries. They have a site here

, where you can preview some of the songs (as well as read the lyrics).