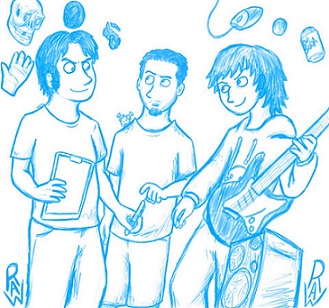 Siblings is a popular Flash series about two brothers: Johny, a super mellow teenager who is fond of playing RuneScape, playing guitar, and talking on the phone; and his older brother Rob, who always does obnoxious ramblings and gets his brother in trouble. Everything is animated using a drawing tablet.

(aka the real Rob), this series originated on

Newgrounds. It also got a spot on its own Web site

If you came here looking for sibling tropes, follow this way, please.