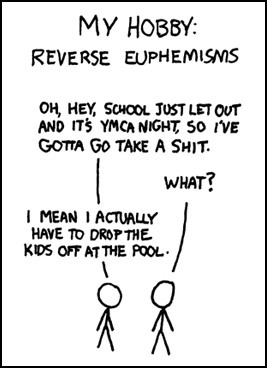 "I'm still waiting for a chance to use 'I have to see a man about a horse'."
Advertisement:

The opposite of Unusual Euphemism, a character replaces an ordinary phrase with an unnecessarily harsh, obscene, or crude one, either as an expression of disrespect or merely for the Rule of Funny. There are several examples in ordinary usage, see The Other Wiki for examples

, but this trope is for particularly imaginative ones.

Truth in Television for members of high-stress professions like emergency medicine, police work, fire fighting, and other first responders. Medical slang in particular is loaded with harsh terms

that patients might find offensive and inappropriate, though doctors and staff claim that Gallows Humor helps them to cope with the reality of their jobs.

Related to Black Comedy. Always takes Refuge in Audacity, and often a case of Vulgar Humor.