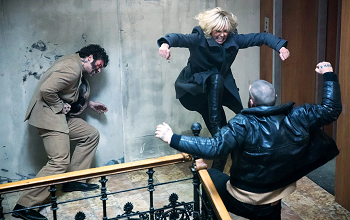 If you are going to have fight scenes, the trick is to write them in such a way that both groups are entertained. If you decide to leave out the "Blah, Blah, Blah" part, see Chop Sockey.

Also see Fighting Series, which use these regularly, Harbinger of Asskicking, which is often used to signal a Fight Scene, and Write a Fight Scene for how to write one.