Paying for the Action Scene 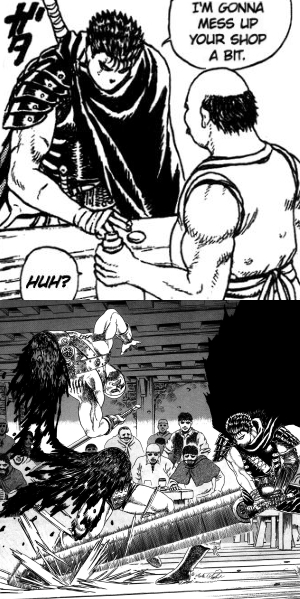 A hero or Anti-Hero gets in a scuffle in a bar, a restaurant, a banquet hall, or another establishment not fit for battle and, after the chaos is over, decides to pay for the destruction left behind. Hero Insurance would typically still be in effect but the hero decides to give the owner a little bit of money in order to pay for the mess. More often than not, this is to make the character look like a total badass, or perhaps a gentleman. Not only did they just beat up or kill an enemy in a typically awesome manner but they decided to toss in a few extra bucks to pay for collateral damage. This can often be an Establishing Character Moment, since the audience can tell the person is not only not to be trifled with, but is also generous enough to take responsibility for the damages. There might also be the possibility that the payment is too small to cover the charges. A Bond One-Liner is optional.