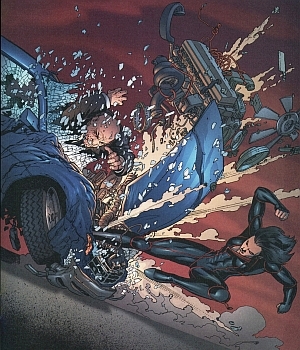 In real life, when a pedestrian is hit by a car, they suffer physical trauma; as a result, automobiles cause more deaths

than any other machine on the planet. While that statistic still applies to drivers, you can expect a number of pedestrians in fiction to hold their own.

A martial artist may punch through a door without breaking their hand, and if a super hero can stop a locomotive by standing in front of it, don't expect a lighter vehicle to survive. Motorcycles? Not a chance. Automobiles? Straight to the junkyard. Aircraft? Not if there's a flying brick. Metal siding crumples like tinfoil, engines get tossed aside, frames crumple, and passengers will be stunned. This trope is occasionally also used as a gag to show just how monstrously fat a character is.

This is generally not Truth in Television unless the pedestrian in question is quite large, like, say… an elephant (other animals, such as moose and deer, have a history of achieving a Mutual Kill when encountering cars).

Often requires Nigh-Invulnerability for straight examples or The Alleged Car for comedy. The vehicle in question may have a recognizable Impact Silhouette left behind.

Overlaps with Trainstopping, which is more about stopping a train than damaging it. Contrast with Car Fu and Toyota Tripwire. See also Chronically Crashed Car.