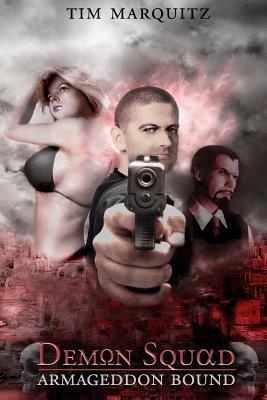 Life is never dull for the Devil's nephew.
Advertisement:

Demon Squad is a Urban Fantasy series by Tim Marquitz. Half-devil and miles from anything resembling heroic, perpetual underdog Frank "Triggaltheron" Trigg is the last man standing against Armageddon.

As the favorite nephew of the Devil, Frank has led a troubled life, but he'd always had his uncle's influence to fall back on. Now, with God and Lucifer coming to terms and leaving existence to fend for itself, his once exalted status of Anti-Christ-to-be does little to endear him to the hordes of angels and demons running amok in the Godless world.With help from the members of DRAC, an organization of wizards, psychics, telepaths, and low-end supernatural beings, Frank must thwart the pro-Armageddon forces and rescue an angel in whose life rests the fate of humanity. Better luck next time, humanity.

There are a number of books which have been released in the series:

This series contains the following tropes:
open/close all folders
The entire series
Armageddon Bound
Advertisement:
Resurrection
At the Gates
Echoes of the Past
Beyond the Veil
The Best of Enemies
Exit Wounds
Collateral Damage
Aftermath