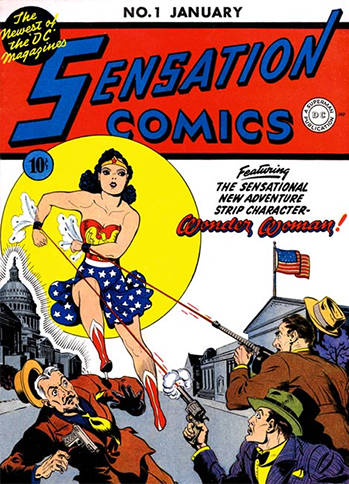 Sensation Comics was an Anthology Comic published by DC Comics from 1942 to 1953, with a name change to Sensation Mystery in 1952. Its claim to fame was as the first book to house Wonder Woman's stories, though she debuted in an All-Star Comics bonus first. The title was reused for a single issue in 1999 as part of the Justice Society Returns storyline. It was revived in 2014 as Sensation Comics Featuring Wonder Woman, a digital first title which was canceled in December of 2015.

Significant features in the original anthology:

Tropes in the Wonder Woman feature:

Tropes in the Dr. Pat feature:

Tropes in other features: