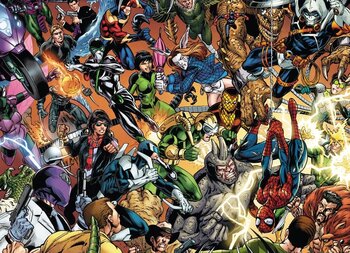 Let's You and Him Fight (and him, and him, and her...)
"Big Boy Caprice, Breathless Mahoney, Flattop, the D.A., Pruneface, Mumbles, Lip Manlis, and the Blank are all out to get the greatest detective of all time!"
— Dick Tracy trailer
Advertisement:

This trope deals with individual stories from a series/franchise that feature several members of the property's Rogues Gallery. These tales don't necessarily fall under Villain Team-Up or Legion of Doom, although there's considerable overlap; they just involve adventures in which a lot of villains appear, whether they're working together or not. Writers sometimes refer to these stories as "gang bangs".

Video game adaptations of comic book properties tend to indulge in this to take advantage of the source material's rich Rogues Gallery.