Comic Book / Superman: Up, Up and Away! 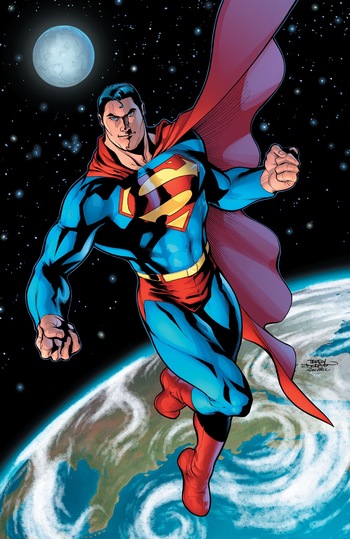 Superman: Up, Up and Away! is a Superman family crossover story arc that was published in 2006. It was told in the Superman and Action Comics books, with Kurt Busiek and Geoff Johns as writers.
Advertisement:

Taking place one year after the events of Infinite Crisis, the story sees Clark Kent adjusting to life without superpowers and making the world a safer place through his work as a reporter. Unfortunately, this period of peace and tranquility cannot last. Lex Luthor, acquitted of the multiple criminal charges he had amassed over the years, is not happy Clark has destroyed his reputation and sets out take vengeance on all of Metropolis. With Luthor having obtained Kryptonian technology, the need for the Man of Steel becomes more evident. Fortunately, Superman gets back in action and confronts Luthor to save Metropolis once again.

Superman: Up, Up and Away contains examples of: