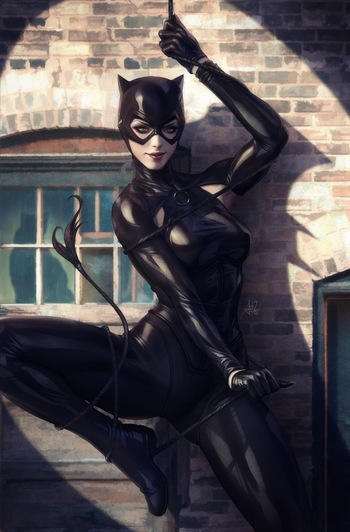 Catwoman by Stanley 'Artgerm' Lau
Well. What's the matter? Haven't you ever seen a pretty girl before?
— Her response, after Batman catches her for the first time, in Batman #1 (1940) written by Bill Finger.

Catwoman is a fictional character associated with DC Comics' Batman franchise. Historically a supervillain, the character first appeared as The Cat in Batman #1 (Spring, 1940), which means she shares her status as the second-oldest of Batman's long-term Rogue's Gallery with The Joker, who was introduced that same issue. The code name Cat-Woman (sic) and the first of her cat-suits were introduced in issue #2. Her civilian identity of Selina Kyle wasn't introduced until Batman #62 (December 1950).

The character had regular appearances in the Batman titles for much of the Golden Age, both as a villain, and as a reformed criminal (or at least attempting to reform.) She disappeared from the franchise for over a decade in "Detective Comics" #211 (September, 1954), for fears that her depiction violated the recently introduced Comics Code. In 1966, over a decade later, the character was revived for the Batman television series.

On the film front, the character was played by Lee Meriwether in The Movie of the Adam West series, then in a more supernatural interpretation by Michelle Pfeiffer in the 1992 film Batman Returns. In 2004, a standalone Catwoman movie starring Halle Berry was released, but the movie was a flop that had little in common with the comic character. She's been played by Anne Hathaway in 2012's The Dark Knight Rises, although she's only ever named on screen as "Selina Kyle" and "The Cat", with the name "Catwoman" only being used in merchandise and other supplemental materials - perhaps to sever ties from the aforementioned Halle Berry flop or possibly just because of the trend in both the Marvel Cinematic Universe and The Dark Knight Trilogy that Comic-Book Movies Don't Use Codenames. She will be portrayed by Zoë Kravitz in Matt Reeves' 2022 The Batman, opposite Robert Pattinson's Bruce Wayne; she previosly voiced the character in The LEGO Batman Movie.

The character has been one of Batman's most enduring love interests, and is seen as the most natural one to him to the point that she and Batman are now engaged as of DC Rebirth.