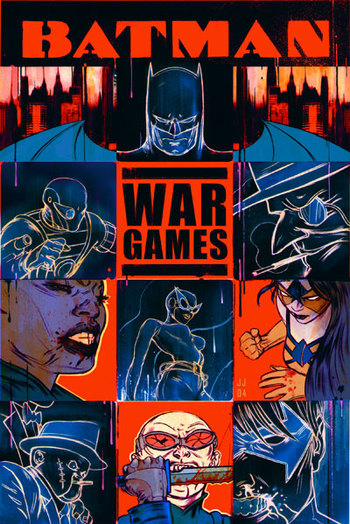 War Games was a Bat Family Crossover released in 2004 that ran through virtually every Batman title at the time.
Advertisement:

The entire plot started off as a Jerkass Batman Gambit. Jack Drake, father of the third Robin Tim Drake, had learned his son was Robin and deduced that Bruce Wayne was Batman. Furious, Jack threatened the two with a shotgun, forcing Tim to retire as Robin or he'd reveal Bruce's secret. Tim, however, took becoming a civilian again quite well, but this didn't satisfy his on-again-off-again girlfriend, Stephanie Brown, alias The Spoiler. Determined to prove her worth, she broke into the Batcave with a homemade Robin costume and demanded to take over. Batman, however, saw things differently. He made her Robin on the condition she was fired if she ever broke a rule, but it was a ploy to get Tim back into the costume, either out of jealousy or fear. Tim didn't take the bait and Steph was fired for breaking a rule that actually saved his life. However, Steph wasn't ready to give up. Breaking back into the Batcave, she stole a plan that would gather the gangs of Gotham under the control of one Matches Malone. What she didn't know was that Matches was actually one of Batman's aliases and when the gathered gangs got nervous, they began firing on each other. The resulting massacre left a power vacuum that everyone wanted a piece of...

The storyline is quite infamous for its flagrant abuse towards Stephanie Brown, who was heavily disliked within the Batman editorial group despite being beloved by the fandom. The Status Quo caused by this story would last for two years and the events of Infinite Crisis, with Stephanie Brown returning just in time for Final Crisis. When it was released in trade paperback form, the storyline was split up into three parts: War Drums, War Games and War Crimes.

This story is not to be confused with the film WarGames.