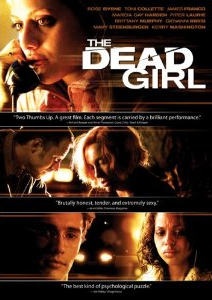 An indie film released in 2006 about a murdered woman and the stories of four other women as their lives come together because of her death.

The Dead Girl is split up into five parts which are shown in the following order:

Not to be confused with Deadgirl, a 2008 psycho horror about an undead girl found in an abandoned asylum, or with the novel Deadgirl, which not related to either of these films.