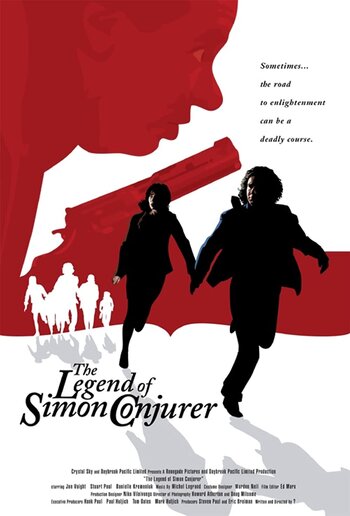 "Simon Conjurer's nothing less than a monster in disguise and in horrid incubation!"
— Dr. Crazx
Advertisement:

Deadly Lessons (also known as The Legend of Simon Conjurer) is a 2006 comedy-drama thriller. Starring, written and directed by Stuart Paul, this indie film is known for its filmmaking being right up there with The Room and Birdemic to the point that it's amazing the film is not more known.

Simon Conjurer (played by Paul) is a seeming "prophet without a god" who teaches both classes of young children and also teaches a night class to help adults through varying mental problems. One night, Conjurer's sworn arch-enemy Dr. Crazx (played by Jon Voight, the only recognizable name in the whole film), in an attempt to stop Conjurer from teaching his prophetical ways of thinking once and for all, kidnaps a child from one of his classes and murders her, framing Conjurer for the crime. As the police come for Simon mid-class, he takes his class on an adventure through Dr. Crazx's mansion where he helps all of his patients confront their inner demons while they help clear Simon's name and prove that Crazx is the true culprit.

The film is also infamous for its long-time sitting on The Shelf of Movie Languishment, having been filmed in the fall of 2003note There's a scene where a truck drives past a movie theater marquee listing Master and Commander and Love Actually as playing with at least one public screening in the summer of 2006. A trailer for the film sat as a YouTube upload since March of that year as well. After years of silence in regards to the film, it eventually quietly appeared on Tubi in September of 2014. The movie can also be viewed in its entirety on YouTube here.