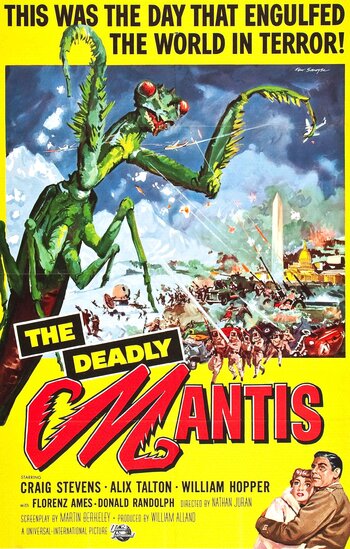 The Deadly Mantis is a 1956 American Science Fiction monster movie directed by Nathan Juran, one of the many films of that era concerning the mutation and animation of a giant beast, usually prehistoric.

In this case, the beast is the eponymous mantis, which is freed from beneath the Arctic ice caps by a volcanic eruption in the opening sequence and proceeds to destroy many things while progressively eating more people, until ace USAF pilot Colonel Joe Parkman (Craig Stevens) accidentally rams the mantis with his jet, forcing it to the ground and killing it. Interwoven into the story is a romantic subplot involving Parkman and magazine editor Marge Blaine (Alix Talton).

Not to be confused with the 70s kung fu film which occasionally goes by Deadly Mantis in foreign releases.