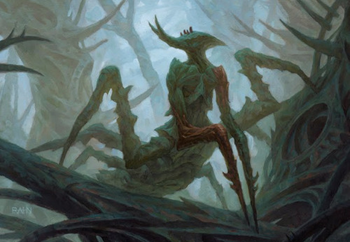 "The fiercest hunters in the Tangle don't seek out the mantises. They are the mantises."
"Cave Johnson here. The mantis men have officially taken over the building! If you can get out, get out now! OH GOD, THEY'RE BREAKING THROUGH THE BARRICADES!!"
— Cave Johnson, Portal 2 Perpetual Testing Initiative
Advertisement:

In fiction, mantises occupy an unusual position relative to their fellow arthropods. They can't match the universal positive connotations of Pretty Butterflies or Virtuous Bees, but they're not necessarily frightening like spiders and scorpions, centipedes, or moths, and certainly not disgusting and annoying like cockroaches or flies.

Rather, mantises are often portrayed as the badasses of the insect kingdom. With their distinctive combat-ready stance and stock-still poise, they can easily be made to evoke martial artists — in fact, there's more than one kung fu style themed on the mantis, as mentioned in the Real Life section below. Naturally, in a world of Talking Insects, expect the mantis to fill the role of an Arrogant Kung-Fu Guy or a Master Swordsman or such, if not a full race of proud warriors. On the more negative side, the mantis might also be rendered as an Ax-Crazy Blood Knight due to the murderous spiky appearance of its raptorial forelegs. And, of course, female mantises may draw on the expected stereotype of devouring their partners after mating (this doesn't occur every time in real life, but it's been observed among nearly all predatory mantis species because mantises simply tend to catch and eat anything smaller than them when hungry — and the male is typically smaller than the female). This provides an alternative way for a writer to use the Black Widow trope while leaving spiders or spider-motif characters free for other purposes.

All of these uses of the mantis can get extra personality mileage out of its upright posture and expressive "arms", making it one of the easiest insects to anthropomorphize. That's not to say you won't find some Big Creepy-Crawlies takes on the mantis as well, since it makes for a great dinosaur-like predator in a story with fifty-foot insects running around.

No matter which kind of mantis you're encountering, if it strays in the least from strict realism, expect its forelegs to be depicted as having scythe-like blades in fulfillment of the Rule of Cool; having such blades would actually make the forelegs useless for a real mantis, as the purpose of their raptorial design is to grasp prey, not slice it to pieces (which in itself is a feat requiring Absurdly Sharp Claws).note Mantises have been observed to eat their prey even if they're still alive, having survived being impaled on the forelegs' spikes and not suffered any mortal injuries in the attack.

As mentioned above, mantises also make a great substitute for spiders. After all, Spiders Are Scary, but they're also pretty cliche, and not as malicious as usually portrayed. Thus, a mantis can be used to make a somewhat more unique killer bug villain.

Often a case of Lean and Mean, if the mantis is a villain. Green and Mean is also common, although they do come in different colors.

Not to be confused with The Deadly Mantis, though that film obviously stars a Slaying Mantis, specifically of the Big Creepy-Crawlies variety.