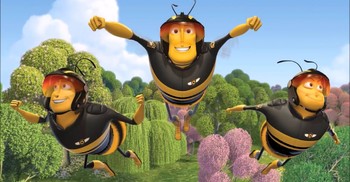 "Bees are your basic striped nectar-gathering fellows, and I've never met a bad one. They're very social, to the point that you get the feeling they'd talk your ear off if they could. They work hard and they play hard, enjoy dancing and drinking nectar, and their motto seems to be "Live and Let Live", even it does just sound like "Bzzz bz buzzzz buzz". Yes, they will sting, if you step on them or slap them or attempt to drink them with a swallow of Tahitian Treat, but it brings them no pleasure. In fact, they're so committed to their peaceful ways, they have an if-I-sting-you-I-die-too policy."
— Mike Nelson's Mind Over Matters
Advertisement:

Bees are among the few arthropods to enjoy consistently positive portrayals in fiction: for centuries, bees have been associated with hard work, community, self-sacrifice (as most honeybees die when they sting, it's easy to frame their attacks as the bees selflessly giving everything to protect their hives and sisters; other bee species like bumblebees can sting an unlimited number of time like wasps can) and other virtues associated with productivity and communal life. They also make honey and pollinate flowers, which does a fair bit to ingratiate them to human society.

Bees can be, and are, also portrayed as aggressive, territorial and quick to sting in anger — but even then, depending on the exact motivations and behavior of the stingers and the stingees, it's entirely possible for the angry swarm to end up being the sympathetic party. The only bees consistently portrayed as vicious and hostile are the infamous Africanized bees, due to them being an extremely invasive, dangerous pest species in the Americas, their aggressiveness and the lengths to which they will pursue intruders.

Since Tropes Are Flexible, this trope can extend beyond actual real life bees — fictional bee-like creatures, bee-based Animal Themed Superbeings, and non-bee characters strongly associated with these insects are all fair game, provided their nature as or association with bees is closely enough linked to their heroic or virtuous nature.

Contrast Wicked Wasps, with which Virtuous Bees are often in conflict, Bee Afraid for more aggressive portrayals of bees, and Scary Stinging Swarm for aggressive swarming insects in general. Subtrope of Animal Stereotypes.