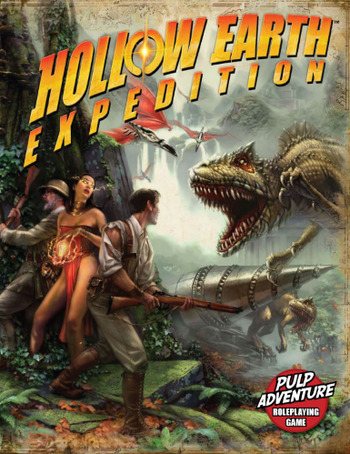 Feeding Nazis to Dinosaurs since 2006.
Advertisement:

Hollow Earth Expedition is an award-winning tabletop roleplaying game designed to simulate pulp novels and old serials. Think Indiana Jones meets The Rocketeer in Journey to the Center of the Earth. Uses its own dice pool system, Ubiquity, which has been licensed to several other games: Desolation, a post-apocalyptic fantasy,All For One—the Musketeers fight demons, Space 1889, Leagues of Adventure—general Victorian adventures with options for steampunk or supernatural horror, and Quantum Black—modern day corporate monster hunters.