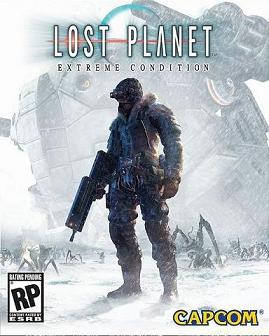 Lost Planet is a Third-Person Shooter developed by Capcom for the Xbox 360, PlayStation 3 and the PC. The game takes place on a planet known as EDN III, a planet that humanity was attempting to colonize. However, the native Akrid, a mysterious race of insect-like creatures, drove off the colonists. Only after discovering the potent "Thermal Energy" inside their bodies did humans fight back. Now NEVEC, led by Commander Dennis Isenberg, is attempting to take control of EDN III by using what is known as the "Frontier System", which will terraform the cold planet in exchange for the elimination of all life on the planet.

You take control of Wayne Holden, an amnesiac and former colonist turned Snow Pirate, whose tasks revolve around the prevention of the Frontier System's activation. Initially, you are led by Yuri Solotov, who used to work for NEVEC, but he leaves around halfway through the game. Throughout the game you fight the Akrid and other soldiers. The first half of the missions pits you against the Crimson Unity, and the second half against NEVEC.

A sequel was released on May 2010. Ten years after the first game, large parts of EDN III have been terraformed, resulting in a variety of environments. The story follows the actions of several groups of "Snow" Pirates as they enter fights against opposing factions and fight off the increasingly aggressive Akrid. This time, NEVEC decides to use their space cannon NEOS to simply gather as much Thermal Energy as they can, and abandon the planet. At this point NEVEC becomes so heavy handed that a breakaway faction, known as Ex-NEVEC, begins to rally the Pirates to eliminate both the corrupted corporation and the titanic Over-G Akrid in the Ultimate Showdown of Ultimate Destiny.

Lost Planet 3 is a prequel revolving around one of the first expeditions to EDN III. You take control of Jim Peyton, who joins an NEVEC-sponsored expedition to EDN III to earn some to money to feed his family and to help find an alternate energy source to end Earth's energy crisis. However, he immediately discovers that the wild life is extremely hostile but also something weirder, a lost human colony established decades before and a cover up by the NEVEC corporation, who now plans to destroy all evidence of their mistakes and misdeeds.

The PTX-40A Vital Suit is a playable character in Tatsunoko vs. Capcom! It also makes a cameo in fellow Capcom game Asura's Wrath.

A cel-shaded cartoonish spin-off called E.X. Troopers was released in 2012 for PS3 and 3DS.

It trades the cinematic sci-fi of the rest of the series for a VERY anime style. Apparently set at a NEVEC school/training academy, it features a Hot-Blooded shounen protagonist, his stoic Bishōnen rival, a mysterious girl who can somehow communicate with the Akrid, and Vital Suits that adhere more to traditional Humongous Mecha designs. Unfortunately, there are no plans to bring it to the west, and because of the way the text is coded into the game, it would have to be virtually rewritten from scratch in order to localize it.

On the bright side, the PS3 is region free, the 3DS region lock can be circumvented, and the 3DS version received a full fan translation in 2019.

All three games are very different from each other with the first game being a story driven yet arcade-y shooter while the second is a co-op centered missions-based shooter with emphasis on fighting giant monsters and the third is a story-driven cover shooter with Metroidvania elements.