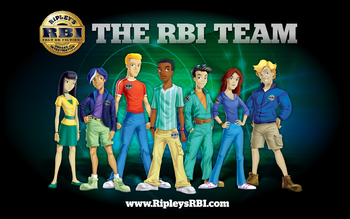 Ripley's Bureau of Investigation is a book series written by Kay Wilkins (uncredited on the covers), illustrated by Ailin Chambers, and (apparently most importantly) published by Ripley Publishing to promote Ripley's Believe It or Not to kids. But it still could be considered a good series in its own right. It consists of eight published books. The two latest books, "Danger Underground" and "Haunted Hotel", were unpublished, until ebook versions recently appeared exclusively on the children's reading app, Pickatale. The series was intended to have twelve books in total, but it discontinued, likely due to low sales.

On an alternate Earth where Robert Ripley started a private international boarding school for highly talented, genius, or superpowered teenagers on his private island, seven of the best students of Ripley High (or Ripley Academy, it varies between the books and the website) are part of a secret elite team called Ripley's Bureau of Investigation, or the RBI. Run and briefed by their favourite teacher Mr Cain, given high tech gadgets by their science/technology teacher Dr Maxwell, and assisted and co-briefed by their hologram AI RIPLEY. The team is dedicated to traveling the world and investigating sightings of strange creatures and phenomena, to determine the truth and to contribute to the database of discoveries made by the late Robert Ripley and the RBI itself.