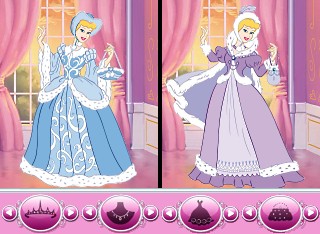 Which ermine gown should she wear today?
In CP2077, you either go full Matrix or you wear the result of a car bomb in a flea market.
— Mikhail_Mengsk

Any time a video game or computer program that lets you change clothes a character is wearing, which usually requires just changing the graphics, so it's like changing the clothes on a paper doll.

This is often a way to customize the character, even if it's just a cosmetic feature. When it's not a game, it could be for avatars in online communities. Either way, expect Changing Clothes Is a Free Action.

The paper doll programs themselves come in several formats, such as Flash games that can be played on a Web browser, or full programs that must be installed onto the user's computer before it may be used. Sometimes the player merely selects the items from various lists (the most common format for videogames featuring this), while other programs allow the player to click, drag and drop the costume elements directly from the wardrobe onto the character.

Some of these are community-driven and require currency to be earned via posting and various other means, which can be used to buy more items and clothes. The point? Possibly, whoever dies with the most clothes/items wins.

And these are not strictly limited to the human form: Paper-doll programs featuring cats, dogs, and other animals and creatures (anthropomorphised or not) are also available, depending on the fandom involved.

Frequently included in Character Customization. If the clothing visibly worn by the character is inseparable from the equipment that affects the character's performance, it can lead to Rainbow Pimp Gear. Some games deal with the issue of having to pick between preferred stats and preferred appearance by allow a second slot for Equipment-Hiding Fashion that overrides the appearance of the equipment in the first slot. If the clothing worn by the character can potentially veer into lewdness, Video Game Perversity Potential is inevitable.

In a game where the costume costs money or must be attained via side quest, and serves no (or little) purpose, the costume becomes Awesome, but Impractical.

Often the outfits will be Pimped Out Dresses, Impossibly Cool Clothes or both. Menswear Ghetto may be in effect.