All spoilers pertaining to the original timeline of the Soul Series will be unmarked. You Have Been Warned! 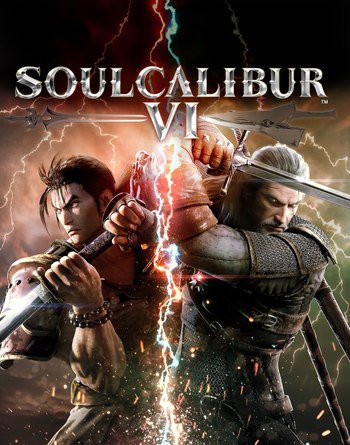 Welcome to the stage of history... retold.
"Perhaps it was fate..."
Advertisement:

Soulcalibur VI is the seventh mainline installment of the Soul Series (eleventh overall), and the first on the eighth-gen consoles PlayStation 4 and Xbox One, as well as the first on PC.

Despite its title, Soulcalibur VI isn't a sequel — at least not in the traditional sense. Rather, it's a Continuity Reboot that doesn't follow the Time Skip utilized by Soulcalibur V and instead goes back to the time of the first Soulcalibur "to uncover hidden secrets" about the struggle between the legendary swords. The story, titled Soul Chronicle, is a major focus in the game.

The roster features a complete host of iconic returning characters, with additional newcomers. Most of the roster from I return, but some of the characters who first debuted in II and III are also playable. In addition, a second story mode called "Libra of Soul" allows players to create their own character and thrust themselves into the conflict between the two swords.

The main roster has 21 characters, plus two seasons of four DLC characters for a total of 29.

Soulcalibur VI was the first and only game in the series to be made under the leadership of Motohiro Okubo, who previously worked on Tekken 7, and the first made in the Unreal Engine. It was released worldwide on October 19th, 2018.

The names of the warriors whose fates were bound to the two swords have been etched into the very fibers of history...