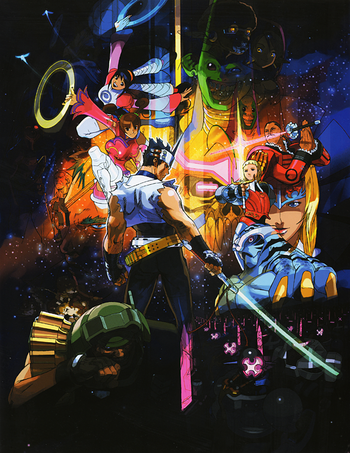 When terror revives, the battle begins once again.
One year has passed since the battle with the Fourth Empire. A new level of peace and harmony has spread throughout the world. However, that battle was only a prelude. Now...the war begins.
—Opening Narration from the arcade intro of Plasma Sword: Nightmare of Bilstein
Advertisement:

Star Gladiator Episode I: Final Crusade is one of the lesser-known fighting games in Capcom's long list of fighters, notable for being Capcom's first attempt to make a mark in the 3D world of fighting games like Virtua Fighter, Battle Arena Toshinden, Tekken, and the Soul series in the 90's. Capcom did try hard to make the game different from the others by using a different hardware for the original PlayStation, similar to the Street Fighter EX series and the first Rival Schools game on the same build. Star Gladiator has a Plasma Gauge, similar to most Capcom fighting games at the time, but what set it apart from the others was the fact that different command inputs (via a specific fighting combo) were required in order to make the Plasma Strike (super move) work.

The story of Star Gladiator takes place from within the future year of 2348, in which intergalactic travel is very common and that mankind is able to interact with many different alien species. Dr. Edward Bilstein: a Nobel Prize-winning German-American prestigious physicist for the Earth Federation, uncovers the secret to humanity's "sixth sense": a technique for capturing the energy of the human mind and discovers how to use it as a new type of energy source called Plasma Power. While Bilstein is able to gain fame and fortune for his discovery of Plasma Power, the Earth Federation initiates a private investigation into the matter and is shocked to learn and discover that Bilstein had used actual human bodies during his Plasma Power experiments. Through this horrifying revelation, Bilstein is arrested and exiled from Earth for his heinous crimes, being placed in a floating prison satellite that orbits the Planet Zeta. Four years later, Bilstein, who is now in a cybernetic body, escapes from the prison and gathers his own cadre of fighters and forces, calling his new group "The Fourth Empire" and declaring his personal conquest of the universe. Realizing that Bilstein must be stopped at all costs, the Earth Federation decides to gather people who are able to use Plasma Power from within their own given right and attempt to destroy the Fourth Empire before they're able to conquer Earth and the rest of the universe.

Despite the effort on the PlayStation with the other Capcom games, Star Gladiator did not set the benchmark for 3D fighters like Street Fighter did with 2D fighters. However, Star Gladiator did manage to warrant a sequel for the arcades in 1998 and later ported to Sega Dreamcast in 2000, which was called Plasma Sword: Nightmare of Bilstein (originally Star Gladiator 2 in Japan). Plasma Sword had dropped the first game's Plasma Combo System in favor of the traditional Street Fighter-esque method of unleashing super moves, which was called the Plasma Strike System, and also introduced fourteen new characters to the series, though ten of them (aside from their character designs and original stories) mirrored most of the original cast in terms of weaponry and movesets.

The character sheet for this game can be found here.