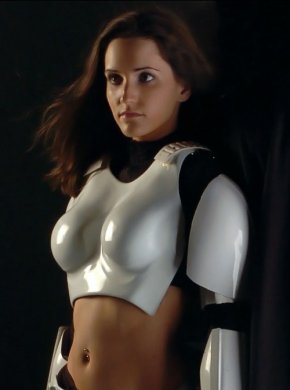 There are many reasons why this uniform doesn't work, and at least two reasons why none of that matters.
"The history of cinema is boys photographing girls."
— Jean-Luc Godard
Advertisement:

The limit of the Willing Suspension of Disbelief for a given element is directly proportional to its sexiness.

In other words, when things are sufficiently sexy, viewers will accept them, even when they are outright impossible, or just astronomically improbable in reality.

Of course, some of these cases can be justified In-Universe if the characters demonstrating this have radically different anatomy than ours or if they have a superpower that would justify this one way or another (such as shapeshifting or size alteration, for example).

A Sister Trope to Sex Sells. Not to be confused with Rule 34.

...but in fiction, we accept the alternative, because it's sexy.