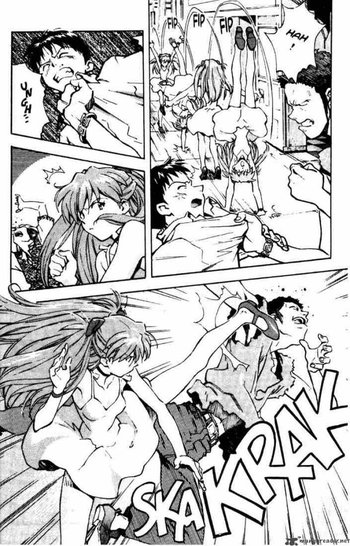 "Anyone got an itch that needs scratching?"
"Why did she have to be a cheerleader? If she was on the debate team I would've vaporized her by now!"
— Dr. Drakken, Kim Possible
Advertisement:

The tendency of fight scenes involving an Action Girl to also feature her doing impractical backflips, gratuitous somersaults, and gymnastic cartwheels to fight her opponents.

It appears to be descended from "wuxia"-style martial arts action found in Hong Kong action films, though it may just be an excuse to show her body from every angle. It also has its roots on the strong reluctance, still active amongst modern-day writers, to feature an attractive young woman taking a full-on punch to the face (unless, of course, it's from a person of the same sex), which forces them to gift her with implausible dodging abilities that will allow her not to be even touched.

This can overlap with Dance Battler, given that several real-life styles of dance employ motions and movements similar to kicks and acrobatic martial arts moves, and also because dancing is traditionally a feminine thing. It can also overlap with Waif-Fu, as she-fu practitioners are often shown inflicting physics-defying damage with even the most delicate-looking of their attacks, and Kick Chick, as kicks and anything that shows their legs in plenty are traditionally fanservicey. Finally, when the acrobatics are used in conjunction with the environment, it can cross into Combat Parkour. In live-action works, there's often some justification on the abilities of the actress in question; dance and gymnastics training is actually better suited to fight scenes than actual fight training - because movie fighting is after all choreography that usually has to be repeated multiple times while still looking good on camera.

For the extreme of fanservice over realism, see Cat Fight.

Do not confuse with Shaq Fu, the indie Beat 'em Up Sifu or the character Shifu from Kung Fu Panda, whose name is (mis)pronounced the same way but spelled differently, and means "master" in Chinese (but only if you pronounce it correctly).