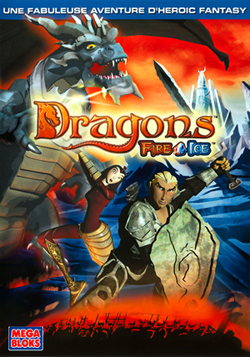 If kids like dinosaurs, then they'll love dragons.
Advertisement:

Dragons: Fire & Ice is a 2004 animated adventure film and the first of a two-part series based on the Mega Bloks toyline. It was released directly to DVD by Lions Gate Home Entertainment. It is the story of two unlikely heroes, Prince Dev (Mark Hildreth) of the Norvagen and Princess Kyra (Chiara Zanni) of the Draigar. These two band together along with their dragons, Targon and Aroara, to help save the Dragon's World and their own world from evil.

It was followed by Dragons II: The Metal Ages.

Try not to confuse this with A Song of Ice and Fire, the Doorstopper series by George R. R. Martin, or the 1983 animated film Fire & Ice by Ralph Bakshi and Frank Frazetta.