Western Animation / Batman Beyond: Return of the Joker 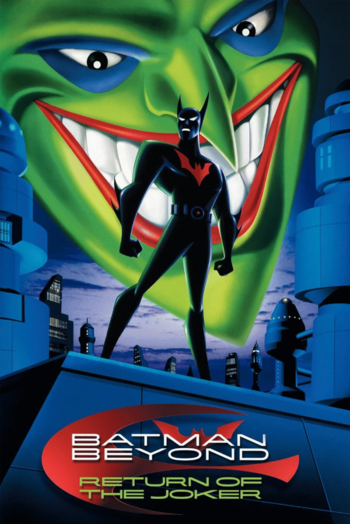 A new hero… An old enemy
"You know, kids, a lot has changed while your old Uncle Joker's been away. New Gotham, new rules, even a new Batman. But now I'm tanned, I'm rested, and I'm ready to give this old town a wedgie again!"
— The Joker
Advertisement:

Batman Beyond: Return of the Joker is a 2000 feature-length tie-in of Batman Beyond, the DC Animated Universe installment that focuses on Terry McGinnis, the Batman of a future Gotham and his mentor (an aged Bruce Wayne).

Decades after his supposed death, The Joker returns to Gotham while being eager to face his old Arch-Enemy (or at least whoever is "pretending" to be Batman). Puzzling both Terry and Bruce is that The Joker seems not to have aged at all in the time since he supposedly died. Terry tries to solve this new mystery, but Bruce is almost killed by a personal attack from the Joker. Terry delves into old man Wayne's dark past, unraveling the long-kept secret of what split apart the Bat-Family and how the longstanding fight between Batman and the Clown Prince of Crime finally ended.

The movie had the unfortunate timing of being produced right after the Columbine shooting, so several scenes were changed mid-production to lessen the violence. Warner Bros. held onto the original print, however, and later distributed it as the "uncut" version of the film.note This is the version almost universally seen on TV nowadays, not to mention pirate and streaming sources; the edited version is a lot harder to find, legally or otherwise.

Return of the Joker includes the following tropes:

While investigating Jordan Pryce, Terry ends up saving him from a yacht just before Joker blasts it to splinters with his newly controlled satellite laser.

While investigating Jordan Pryce, Terry ends up saving him from a yacht just before Joker blasts it to splinters with his newly controlled satellite laser.