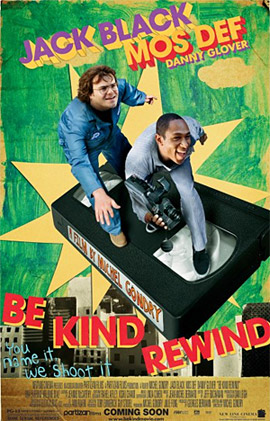 "I will shoot you and I know robot karate."
— Jerry, while attempting to re-enact a scene from RoboCop (1987).
Advertisement:

Be Kind Rewind is a 2008 comedy directed by Michel Gondry and starring Jack Black and Mos Def. Mos Def's character, Mike, helps run a video store that stubbornly offers VHS tape rentals regardless of the rise of DVDs. Mike's peculiar friend Jerry (Jack Black) tries to sabotage a power station and nearly electrocutes himself, becoming magnetized in the process. He then walks into the video store, erasing all of the VHS tapes. Angry customers begin to come in complaining, and Mike is at a loss as to how to replace the store's stock on a limited budget. The store has already received threats of foreclosure, which the owner has tried to prevent by getting the building registered as a historical landmark as the birthplace of jazz singer Fats Waller.

The idea soon occurs that Mike and Jerry will reshoot the films themselves, using whatever they have available. They start with ambitious projects such as Ghostbusters (1984) and RoboCop (1987), creating a crazy home video feel they call being "Sweded," claiming that the films are special Swedish imports. The store gathers popularity around the neighborhood, so much so that the FBI anti-piracy warning at the start of the tapes becomes a reality.