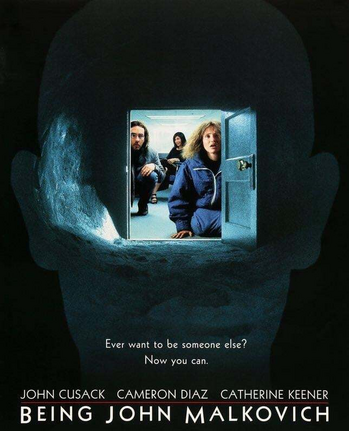 Being John Malkovich is a 1999 surrealist fantasy black comedy-drama directed by Spike Jonze and written by Charlie Kaufman, both making their feature film debut.

Craig Schwartz (John Cusack), a struggling puppeteer in New York, gets a job as a filing clerk on the 7½th floor of the Mertin-Flemmer Building. One day, he finds a hole hidden behind a filing cabinet that leads into the head of John Malkovich, where you spend 15 minutes seeing life through his eyes before you fall into a ditch beside the New Jersey Turnpike. Craig and his coworker/crush Maxine (Catherine Keener) end up making a business out of it, and his wife Lotte (Cameron Diaz) ends up finding out how much she likes being inside John's body. Mind Screw ensues.

While its bizarre premise has seen endless acclaim as one of the most truly original of its time, it also led to a fair share of Troubled Production among studio executives who were unwilling to take a chance on it. It did end up a critical and commercial success and was nominated for three Academy Awards (Best Original Screenplay, Best Director, Best Supporting Actress).

, an Interactive Fiction parody/homage to the film.