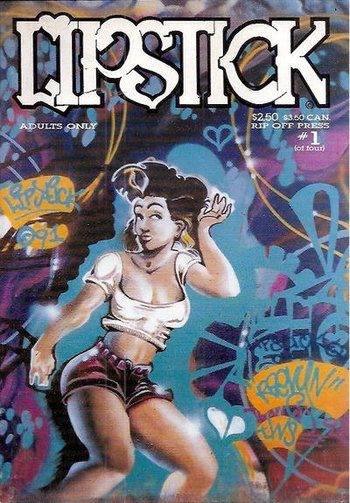 The artist's signature is just about legible, if you know what you're looking for
"I just wrote on the wall: Take that, society!"
— Graffiti sprayed on a wall in an episode of Family Guy
Advertisement:

Since the 1970s, graffiti have become an increasingly common occurrence in urban areas, and you probably won't find a back alley or an underpass that doesn't have a handful of tags sprayed on, unless it's been recently buffed. Therefore, when works of fiction deal with modern urban settings, graffiti cannot exactly be ignored. In live-action movies and TV series, one can just film the real things, but with comics, animation and video games, the artists must stretch their own imagination. One solution, which doesn't involve creating more detail than necessary, is to make the graffiti too illegible to mean anything at all, just random marks that may or may not look like they were intended as writing.

Since most artists don't have an aerosol-scented past, graffiti are usually ignored, unless used as a plot point, such as conveying Arc Words. Also, you rarely see massive murals painted as homages to the neighborhood.