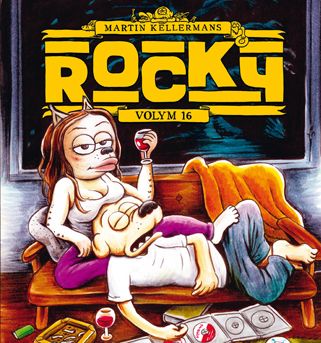 Rocky is a Swedish autobiographical comic created by Martin Kellerman. Mostly autobiographical, it follows Author Avatar Rocky, a Funny Animal dog, and his slacker friends, as they deal with relationships and maturity (often the lack therof), hang out at bars and coffee houses and have unusual escapades and often-embarrassing one-night stands at music festivals and Hip-Hop concerts. Artistic influences include Mats Jonsson, Harvey Pekar, Robert Crumb and Peter Bagge, and numerous Shout Outs to (usually American) rappers, TV shows and movies are sprinkled throughout the comics. As time time passed (and Kellerman got a substantially more stable life situation), the theme of the comic gradually shifted from booze-and-sex-fueled misadventures to coffee-fueled conversations about life, relationships and pop culture.

Kellerman created the comic after his then-girlfriend broke up with him and he got fired from a pornographic magazine for going too far. Initially drawn for the amusement of himself and his fans the comic was so successful in Sweden that it was eventually translated by Fantagraphics Books, who published two volumes of translated comics, and it was briefly published in the American version of Metro, the Swedish free newspaper that typically published Rocky in its country of origin. But, as in Sweden, it got canned for being too edgy. In direct contrast to the sometimes controversial reaction Rocky received from newspaper readers, some underground cartoonists considered Rocky to be too mainstream.

While barely known in the United States, Rocky is quite well-known in Sweden, and even appeared on a national postage stamp, a rarity for a comic. Kellerman directed a play based on his comics, and a series of five-minute CGI-animated shorts were produced for Swedish television, and later released on DVD in that country (but never translated into English or released in the United States).

In April 2018, after 20 years of production, Kellerman announced that Rocky would cease, and that he would move on to other projects.

No relation to the Sylvester Stallone movie series.