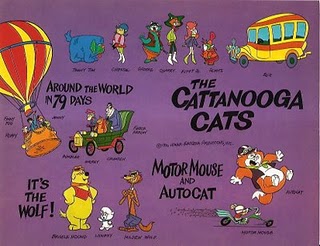 Cattanooga Cats was Hanna-Barbera's attempt to duplicate the success it enjoyed with The Banana Splits. Running in 1969/70 on ABC, this hourlong series had no live-action segments.
Advertisement:

The headliners were an all-feline rock band, consisting of Country, a guitarist; Scoots, a bassist, and Groove, a drummer. Their female companion, Kitty Jo, looked like a feline version of Daphne Blakenote or maybe Daphne was the human version of Kitty Jo; she also sang on a few of their songs. They had a few cartoon segments, but most of their appearances were in music videos, à la The Archie Show.

A season later, The Cattanooga Cats was reduced to a half-hour airing on Sunday mornings, retaining Around the World in 79 Days as a feature. Motormouse & Autocat was split off into a separate show airing on Saturdays, taking It's the Wolf! with it.

open/close all folders
General
The Cattanooga Cats
Around the World in 79 Days
It's the Wolf!
Motormouse and Autocat