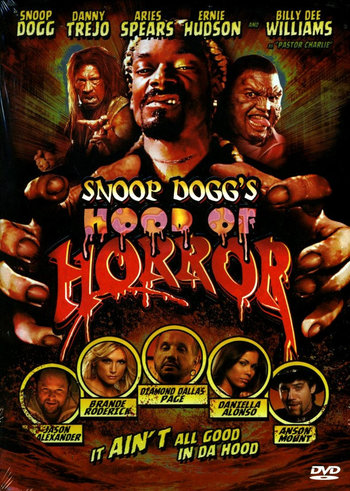 It AIN’T All Good in Da Hood
Advertisement:

Hood of Horror (a.k.a. Snoop Dogg's Hood of Horror) is a horror anthology film of three short tales set in an urban milieu in a style reminiscent of Tales from the Crypt and Tales from the Hood. Directed by Stacy Title, it was the "secret" ninth film screened in the 8 Films to Die For film festival on November 19, 2006. It opened worldwide in theaters on May 4, 2007.

The Hound of Hell (Snoop Dogg) is a guide through three stories from a neighborhood of depraved citizens. The first story, “Crossed Out” is about a tagger who discovers that not all gangsters die hard. The second entry, “The Scumlord”, tells the tale of a foolish Texas oil fortune heir who kills for money but can't afford to stay living. And finally, there’s “Rhapsody Askew”, a story of a huge rap star who uncovers a few skeletons in his dressing room that try to kick down his door.