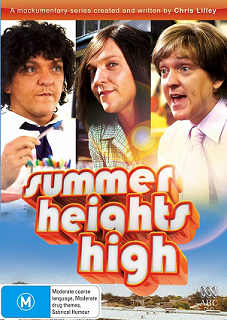 None of these ever meet, which is for a reason — all three are expertly played by Lilley himself.

Most of the show focuses on highly detailed Improv comedy filmed at an actual school, with a large cast of teenagers all participating in the story. Although the show is largely a parody, many real social issues in Australian society are examined, and Lilley's characters get some very genuine moments as the story progresses.

Over the course of eight episodes, Mr G develops a drama production based on the incident of a student dying from a drug overdose, Ja'mie attempts to fit in with her new 'povo' school and start a Year 11 dance formal, and Jonah flouts the school rules with his gang of friends.

The series very much takes Refuge in Audacity, saying and doing things that most other shows refuse to do. As a result of this, it became extremely popular, but was most popular among school students, who recognised parallels with the show in their own daily lives.

Also, its popularity resulted in Lilley (in the Mr. G persona) releasing a single, Naughty Girl, based off a song from the musical in the show.

A sequel series, Ja'mie: Private School Girl aired in November 2013, and as it concluded its run in Australia, Lilley announced another: Jonah from Tonga.