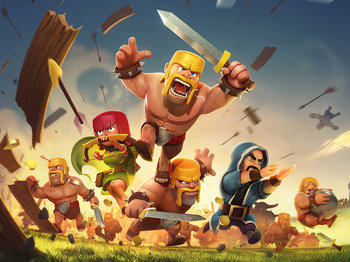 You and this army.
Advertisement:

Clash of Clans is a combat strategy game developed by Supercell (or Sup-Erc-Ell if you wanna get technical). It's on both iOS and Android.

Each player is given control of a city to build up as they please: defenses, walls, research, troop creation, etc. Once you've gotten enough mooks, it's time to attack: you can fight in single-player dungeons or attack other players. You don't have full control over your army, though: you get to choose where in the defender's city they spawn, but after that they follow their own AI routines in choosing what to attack. This places an emphasis on defensive city layouts, arranging your buildings in a way that "encourages" the AI into poor choices. This is perhaps best seen in the single-player campaign, where you fight against increasingly elaborate cities.

There is no real goal besides "get stronger," though that hasn't stopped the game from becoming one of the highest-grossing games in the smartphone economy. For a few years in the mid-2010s, it was the king of Mobile Phone Games, having exceeded Candy Crush Saga as the game with the highest revenue. Most smartphone-game companies play things very close to the vest, so there are no hard numbers to be found; only one company even does estimates of how much anyone's making. But that company's estimate was that at its peak, Clash of Clans was raking in something like $1.25 million (USD)

per day on iProducts, with only Game of War: Fire Age and its ubiquitous Kate Upton commercials making anywhere near as much. While it's now been surpassed by newer games, with Fortnite among the most notable, it still regularly makes the top 10 on the money list.

The game eventually gained a sequel, titled Clash Royale, which contains some elements from this game, but is a much different game from it.

In late 2016, Clash of Clans received an animated webshow called Clash-A-Rama!: The Series

produced in conjunction with Tolerable Entertainment and Rough Draft Studios. The series is based on a webcomic adaptation of the same name, and features several well-known voice actors such as Tom Kenny, Charlie Adler, Tress MacNeille, and Kari Wahlgren, and also has much of the writing team for Futurama.

The first TV commercial can be seen here.

Clash of Clans contains examples of: