Literature / The Catcher in the Rye 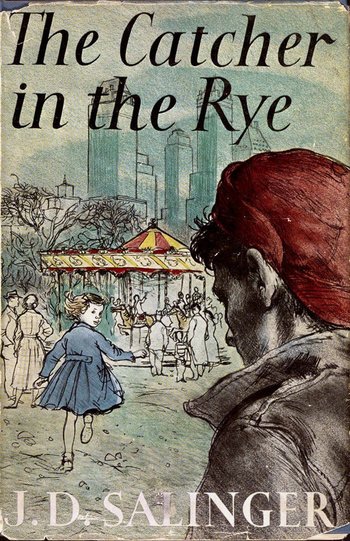 A rare illustrated cover, from the first UK edition.
If you really want to hear about it, the first thing you’ll probably want to know is where I was born, and what my lousy childhood was like, and how my parents were occupied and all before they had me, and all that David Copperfield kind of crap, but I don’t feel like going into it, if you want to know the truth.
— The opening line
Advertisement:

The Catcher in the Rye is a 1951 novelnote Originally published serially in 1946-48 by the late, reclusive author J. D. Salinger.

The story concerns Holden Caulfield, a smart but troubled teenager who, after being expelled from his boarding school in December 1949, spends three days wandering around New York City, mourning for the loss of innocence in children, and failing to understand the people that surround him. Holden himself can come off as a Jerk with a Heart of Gold as he unkindly judges almost everyone, but as the book explores his underlying psychological issues and reaches its Bittersweet Ending, his true nature becomes apparent.

The book is considered one of the best novels of all time, is practically the textbook for First-Person Narration, and is regularly found in critical lists of the greatest English-language works of fiction. However, it is also a frequent target of Moral Guardians for its (allegedly) offensive language and nihilistic attitude, not to mention the fact that it was caught in the possession of a few notorious murderers (making it a sort of prototype of the post-Columbine scares about violent video games). It is also the most popular novel never to have been adapted into a movie.

The Catcher in the Rye contains examples of: