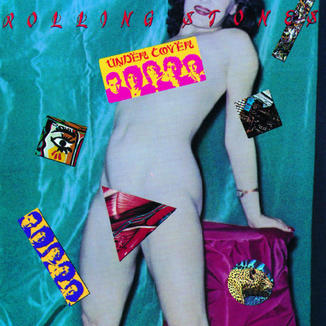 Even the band was "Pretty Beat Up" by this point.
Advertisement:

Undercover is the seventeenth studio album (nineteenth American album) by The Rolling Stones, released in 1983. It was the Stones attempt to re-invent themselves for a new era. However, the relationship between Mick Jagger and Keith Richards began to deteriorate sharply, both personally and musically, largely due to Jagger's focus on trying to stay hip and current and Richards' focus on sticking with their Blues Rock roots. As The '80s progressed, this would have a detrimental impact to the Stones work, and was surely a catalyst for Bill Wyman's departure in 1993.

Upon release, it ended their streak of number 1 albums, reaching number 3 in the UK and number 4 in the US charts. The singles off this album were also minor successes. To this day, this album divides critics and fans.