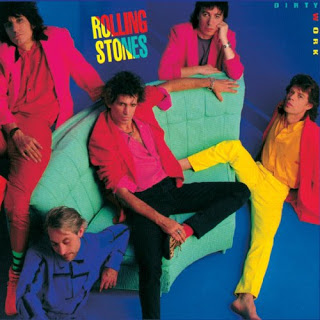 Dirty Work, an album where Jagger was mostly absent and thus had others do the dirty work for him.
Advertisement:

Dirty Work is the eighteenth studio album (twentieth American album) by The Rolling Stones, released in 1986. It was recorded during the lowest period of the Stones career (and indeed the relationship between Mick Jagger and Keith Richards) where they came dangerously close to breaking up. This is largely due to Jagger placing his developing solo career as his top priority over the Stones. After the album was released, Jagger refused to go on tour with the Stones, and went back to his solo career. Richards was infuriated.

Upon release, it was greeted with mixed to negative reviews. "Harlem Shuffle"— originally by Bob & Earl— became their first lead single to be a cover since "Little Red Rooster" in 1964! To this day, Dirty Work is generally considered to be the worst Rolling Stones album, owed in part to how heavily the negative recording atmosphere reflected in the quality of the tracks (many reviewers at the time characterized the band as sounding old and tired throughout the album), although it's not without it's fans. Fan favourites include "One Hit (To The Body)", "Harlem Shuffle", "Winning Ugly" and "Had It With You".

On a sadder note, Stones founding member Ian Stewart (who was demoted to road manager and session musician in 1963) died of a sudden heart attack (At a hospital waiting room) shortly after the album was completed; Stewart provided piano parts for the album as a session musician. As a tribute to Stewart, the Stones chose to end Dirty Work with a recording of him playing a cover of "Key To The Highway". They also dedicated this album to him - "Thanks, Stu, for 25 years of boogie-woogie". Stewart's role with the Stones would be filled by Chuck Leavell.