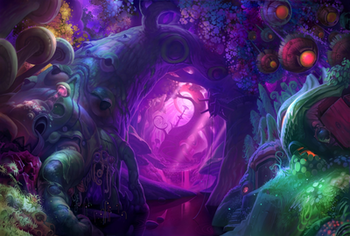 Even the load screens are colourful.
Advertisement:

Say you just left a mountain prone to mudslides, then you are surprised you stumble upon a Brightly Coloured Rainforest with multicoloured plants and the skies are rainbow. A world that is colorful even without its wildlife. Congratulations, you just entered an Amazing Technicolor World. But an Amazing Technicolor World is not neccessarily any world as a whole—it can also be just be part of one.