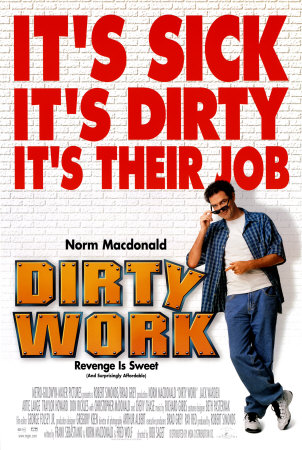 A 1998 comedy film starring Norm Macdonald and Artie Lange, co-written by MacDonald. It was the feature directorial debut of Bob Saget (yes, that Bob Saget).

Childhood friends Mitch (MacDonald) and Sam (Lange) need $50,000 to get Sam's father a life-saving heart operation. Problem is, both are completely incompetent when it comes to holding down a job. That is, until they figure out they can make a living out of the one thing they're actually good at: Revenge!

Dirty Work is also noteworthy for being the final film that Chris Farley appeared in following his death, although he only played a minor character rather than having a starring role.