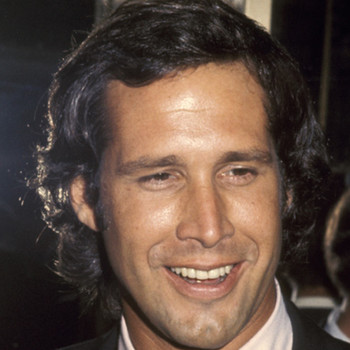 "I made about twenty-eight movies, and I think about five of them were good."
Advertisement:

He's Chevy Chase (born Cornelius Crane Chase on October 8, 1943), an American actor/comedian known for his pratfalls... and you're not.

Chase began a full-time career in comedy by joining the National Lampoon Radio Hour in 1973; he and many other comedians on the program would later become the original cast members of Saturday Night Live. He was known for his physical comedy, particularly his impressions of then-President Gerald Ford (which wasn't so much an accurate impression or even one that was hilariously exaggerated to the point of being perceived as real by the general public as it was an excuse for Chevy to do his pratfallsnote though, thanks to Chase's impression, there are people out there who do believe that Gerald Ford was that comically clumsy). He was also the original Weekend Update Anchor — "Good evening. I'm Chevy Chase, and you're not."

Chase received a lot of praise for his role in the show, though he left in the middle of the second season, returning later to host eight timesnote nine if you count the last episode of season six in 1981, which had no host, but had celebrity appearances by him, Al Franken, Christopher Reeve and Robin Williams, one of whichnote the first episode of the show's eighth season had him appear live via a television set because Chase missed his flight and couldn't get to the studio to do rehearsals in time; another of whichnote during the show's 12th season was done with Steve Martin and Martin Short to promote The Three Amigos; and the last of whichnote during the show's 22nd season was his final time before he was banned for being high on painkillers and harassing the cast and crew. Chase was SNL's most frequent former cast member to come back and host. Along with Bill Murray and Dan Aykroyd, Chase is also one in three members of the "Not Ready for Primetime" era of SNL (fall of 1975 to spring of 1980) to come back and host the show. Chase is also one of the few members of the "Five Timers Club"note the club for celebrities who have hosted SNL more than five times, as seen with such famous faces as Tom Hanks, Christopher Walken, Buck Henry, Steve Martin, Alec Baldwin, Candice Bergen, Jonah Hill and Drew Barrymore to have been a cast member on the show, joining Bill Murray and Tina Fey.

After SNL, Chase begin taking film roles with appearances in hit films such as Caddyshack, National Lampoon's Vacation and its sequels, and ¡Three Amigos!, roles that would make him a highly paid actor in the late '80s. He also hosted the Academy Awards in 1987 and 1988. However, his career went in decline in the '90s as many of his films flopped at the box office, with even Vegas Vacation being a commercial disappointment. He hosted a talk show in 1993 called The Chevy Chase Show which only lasted for five weeks. He gained some prominence again with the role of Pierce Hawthorne in the TV show Community, though he did have creative issues with the show's creator Dan Harmon throughout its run, leaving that show in the 4th season. He has a reputation that could charitably be described as "difficult."