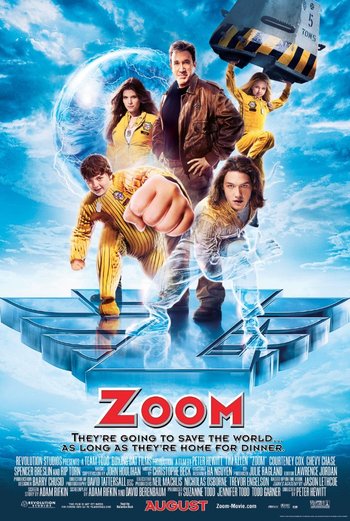 Zoom, also known by its home media title Zoom: Academy for Superheroes, is a 2006 superhero family comedy film. It tells the story of Jack Shepard (Tim Allen), formerly Captain Zoom of the superhero group Team Zenith. Years ago, an attempt to boost the powers of Jack and his brother Conner (Concussion) resulted in Conner going mad, killing his teammates, and being exiled into a dimensional vortex by Zoom.

Thirty years later, a retired and jaded Shepard is called in to train a group of super-powered youngsters, at Area 52. Unbeknownst to him, the real purpose of their training is so they can battle Concussion, who is on the brink of returning to his home dimension.

The film is loosely based on the Zoom's Academy children's book series.

Zoom: Academy for Superheroes provides examples of the following tropes: