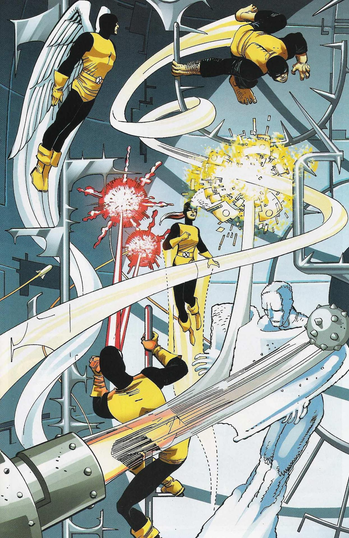 "Yeah, 'no pain, no gain' and all, but this is just ridiculous!"
"Due to mandatory scheduled maintenance, the appropriate chamber for this testing sequence is currently unavailable. It has been replaced with a live-fire course designed for military androids."
— GLaDOS, Portal
Advertisement:

In fiction, it's often necessary for characters, particularly those in the superhero genre, to train to fight extreme threats above and beyond what an ordinary person might face. So how does one train to fight supernatural or superhuman threats? By risking one's life in a training area or simulation, apparently.

The Deadly Training Area is a combination of obstacle course and live fire range where the hero must dodge a number of dangerous threats while achieving some objective. Common obstacles and weapons include solid objects that move rapidly to block them, giant blades or saws, laser cannons, simulated enemies (with varying amounts of firepower), and, in more realistic settings, guns.

More sophisticated examples will have difficulty levels, starting with "newbie" and ending with "holy crap we're all going to die!" In the most extreme cases, this training area will be just as dangerous or more dangerous than the hero's foes themselves.

Sometimes Fridge Logic kicks in regarding these training arenas. More often than not from a character asking the question of how risking death in training is better than risking death on the battlefield. Occasionally, these extreme measures are explained as emotional training, dire necessity, or simply the product of a mentor with a Darwinistic approach. Otherwise, if some characters in the setting have incredible regenerative or healing powers, it makes sense to make the training as dangerous as safely possible to better prepare the recruits: better break you spine in the training room and have it healed in five minutes tops, than skip the training room and break your spine on the battlefield with no magical healer available.

A common plot involving one will be someone trapped inside on too hard a difficulty, sometimes caused by a Phlebotinum Breakdown or Holodeck Malfunction.

See also Improvised Training and Virtual Training Simulation. One of these will almost always be used in a Danger Room Cold Open. They are sometimes used in a Training Montage and/or Training from Hell. It is also sometimes the setting for an Unwinnable Training Simulation. This kind of training area can be a Simulated Urban Combat Area or a Fake Town, if it is intended to look like an actual urban area.