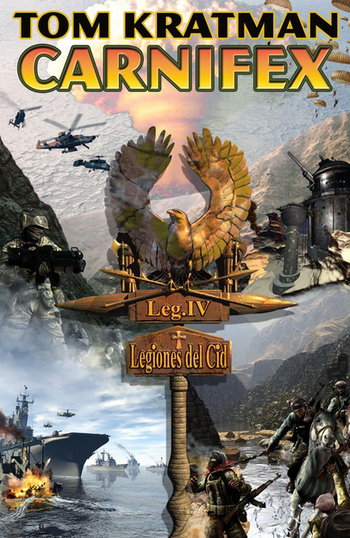 Patrick Hennesy (also known by his wife's family name, Carrera), a retired soldier, has his family taken from him in a terrorist attack on the building they were visiting. This, to Patrick, cannot stand. Using the money bequeathed to him by another relative also killed in the attack, he builds an army to gain vengeance on the organization that made the attack.

Only there are more enemies awaiting him than he's aware of...

In addition, there is a spinoff volume of short stories, penned by authors such as Chris Nuttall and Peter Grant and edited by Kratman: Terra Nova: The Wars of Liberation (August 2019).

Carrera's Legions is also sometimes known as the Legion Del Cid series, or by the title of its first book, A Desert Called Peace (used by The Other Wiki).

This Series uses the following tropes: