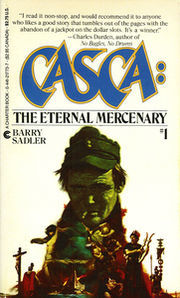 When they flew Casey into the hospital at Nha Trang, Vietnam, the medics were sure he would die. That he didn't was only the first surprise. The second, and bigger one, was that Casey had been fighting for two thousand years, ever since that day on the hill of Golgotha when he thrust his lance into the side of the man on the cross. "Soldier, you are content with what you are. Then that you shall remain until we meet again." Thus does Casca's journey begin, a man who cannot die, does not age, and who is forced to live through the ages, through many wars, only as a soldier until Christ returns.
Advertisement:
Back cover summary

A paperback book series written from 1979 to the present day, Casca is a Wandering Jew series about Casey Romain, AKA Casca Rufio Longinius, AKA... the list goes on. While initially written by Barry Sadler (of "Ballad of the Green Berets" fame), ghostwriters took up the job in the late '80s. After Sadler's death in 1989, other authors have written the rest, the most notable being Tony Roberts.

While the first book starts during the Vietnam War, the series chronologically begins in Jerusalem, 30-something A.D. After Pontius Pilate hands Jesus over to the Jews, Casca Rufio Longinius is tasked with crucifying him. However, when Casca spears Jesus in the side "just to make sure", Jesus turns about to be less dead than the Bible would have you believe. Jesus then announces "Soldier, if you are content with what you are, then that is what you shall remain. As I return to my Father, so you shall return to me". Casca is then cursed to walk the earth until Jesus' second coming. What happens after that depends on his behavior, but judging by his behavior... who knows?

He then fights in virtually every major war that has occurred in the past 2000 years, fighting alongside and against some of history's greatest generals and soldiers. Later on, he finds the "Brotherhood of the Lamb", a pseudo-Christian cult that worships Casca's old spear. The Brotherhood keeps Casca in their sights until the Armageddon; though they may hate Casca for his actions on Golgotha, they must not prevent him from meeting their Lord. Casca Longinus is their path back to Christ and they will stop at nothing in keeping their most hated enemy in their sights for all time.

A Comic Book adaptation was announced by Wicked Studios in 2012, but seems to have gotten stuck in Development Hell.