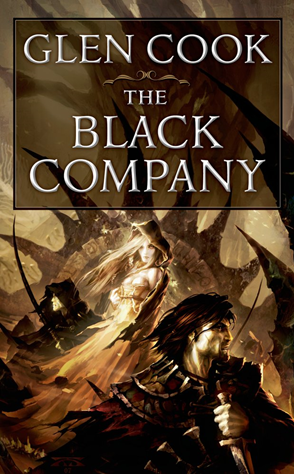 You who come after me, scribbling these Annals, by now realise that I shy off portraying the whole truth about our band of blackguards. You know they are vicious, violent, and ignorant. They are complete barbarians, living out their cruelest fantasies, their behaviour tempered only by the presence of a few decent men. I do not often show that side because these men are my brethren, my family, and I was taught young not to speak ill of kin.
— Croaker, The Black Company
Advertisement:

The Black Company is a series of Dark Fantasy books by Glen Cook, and chronicles an ancient mercenary company — the titular Black Company, last of the Free Companies of Khatovar — as it plies its trade across the world and tries to find its lost roots. The series is notable for its unusual choice of protagonists in a fantasy setting: being a group of mercenaries, the Black Company does not turn down potential employers, and it prides itself on its sense of professional honour.

The series begins as the Company reluctantly accepts the commission of a northern sorceress tyrant known as "the Lady". A prophecy concerned with her downfall is about to be fulfilled, and the people are rising up in anticipation of the event. The Company has often been betrayed in the past by its employers, and the Lady is one of the least trustworthy ones it's had, but she pays well, and the Black Company goes where it is desired, so it commits to the contract.

As time goes by, the Company struggles to survive and recover its past as it goes from employer to employer, drifts from conflict to conflict, and sees its fortunes wax and wane. It's favoured one moment and betrayed the next; it is one minute a legion, and the next nearly annihilated — yet this is not unusual, because while the people may come on and go, there will always be a Black Company.

Glen Cook served as a soldier, and in writing the books desired to tell a story from the perspective of the grunts of a fantasy setting. The verisimilitude is held to be very high, with the mercenaries being very frankly portrayed, rarely heroic and occasionally unsympathetic. The Black Company is just one group, stuck on one side or the other of those conflicts where no side can be said to be completely in the right, and out of its depth when there can.

The series has had a profound influence on subsequent fantasy authors, with Jim Butcher, Steven Erikson, Joe Abercrombie and many others citing it as direct influence on their own writing.

In 2004, Green Ronin published an RPG book based on the series for the d20 System as part of the Mythic Vistas series.

In 2018, it was announced that the books are getting a television adaptation.

Not to be confused with Battlefield: Bad Company.

The Black Company provides examples of: