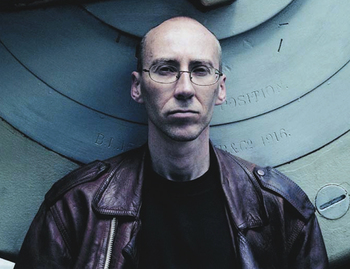 Steven Erikson is the pseudonym of Canadian fantasy author Steve Rune Lundin, a trained archaeologist and anthropologist, as well as a graduate of the Iowa Writers' Workshop.

He often deals with themes of history, civilization and the human condition. However, his fantasy and sci-fi novels and novellas also show a humorous and satirical streak.

His best known work is the Malazan Book of the Fallen, a sprawling epic fantasy series based on a homebrewed GURPS setting he and fellow author Ian Cameron Esslemont developed after becoming frustrated with Dungeons & Dragons.

Works set in the world of the Malazan Empire:

Other Novels and Novellas:

Tropes that can be found in his work are: