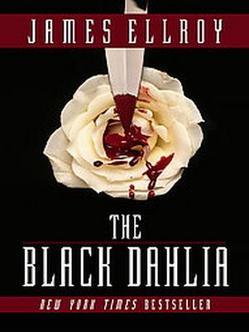 A 1987 novel by James Ellroy and the first installment in the LA Quartet.

Dwight 'Bucky' Bleichert is a former middleweight boxer who got out of the fight game in order to join the L.A.P.D. What starts out as a friendly rivalry with fellow officer and also ex-fighter Lee Blanchard develops into a solid partnership. Things seem to be going well for the pair and a strong bond forms between both themselves and Blanchard's live in 'girlfriend' Kay Lake. The happy tripartite is broken apart by the horrific murder of a woman named Elizabeth Short in 1947. The victim, quickly labeled 'The Black Dahlia' by the press, begins to serve as an obsession for the detectives. Things quickly go From Bad to Worse.

Has been adapted into a 2006 film. Has nothing to do with a 1998 game of the same name. The 1946 Film Noir The Blue Dahlia is name-dropped in the novel (the murder victim is compared to that film's character, and so 'The Black Dahlia' moniker is born), but is otherwise unrelated.