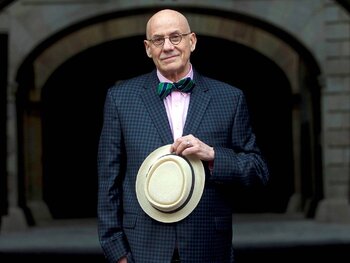 The essential contention of the Underworld USA trilogy ... is that America was never innocent. Here's the lineage: America was founded on a bedrock of racism, slaughter of the indigenous people, slavery, religious lunacy ... and nations are never innocent. Let alone nations as powerful as our beloved fatherland. What you have in The Cold Six Thousand — which covers the years '63 to '68 — is that last gasp of pre-public-accountability America where the anti-communist mandate justified virtually any action. And it wasn't Kennedy's death that engendered mass skepticism. It was the protracted horror of the Vietnamese war.
—James Ellroy
Advertisement:

One of the quintessential Mad Artists of the 20th century, Lee Earle "James" Ellroy (born March 4, 1948) had a troubled childhood due to his parents' highly dysfunctional relationship that ended in their divorce. The key event in his life happened when he was just ten years old, when his mother was raped and murdered. The crime was never solved and Ellroy went to live with his father, who died seven years later. From there he dropped out of school and became a homeless, drug-addicted thief. After spending some time in jail he began to turn his life around by quitting drugs and getting a job as a caddy. However, his true passion became writing. His mother's murder had left him with a fascination of violent crime, much of it centered around the similar murder of aspiring actress Elizabeth Short, popularly known as the "Black Dahlia" case. One of his novels is a fictionalized account of the case to give Short a bit more closure than she received in real life, one of the biggest cases of Creator Breakdown in a career full of it.

His books include lots of Black-and-Gray Morality and Deliberate Values Dissonance, as well as numerous characters. Ellroy's novels are, invariably, brutal and violent, suffused with a jaundiced, cynical, world-weary tone. Their protagonists - almost always, though not exclusively, men - are usually desperate scrabblers and Anti Heroes at best. Ellroy's narratives feature intricate, dense plots that require flow charts and extensive notes to keep track of.

His most famous series is the LA Quartet, a collection of four hardboiled detective novels set in Los Angeles during the post-war years. These four books — The Black Dahlia, The Big Nowhere, L.A. Confidential, and White Jazz — defined noir in the minds of many modern readers, and became kind of the canonical take on the Golden Age of Hollywood. In them, Ellroy looked to expose the dark underbelly of the glittering LA facade, telling stories of elaborate, often sickening conspiracies that swallowed whole the lives of innocent men and women. The books occupy a shared continuity, with many characters appearing in multiple novels, but they're also standalone stories that don't require knowledge of the previous books to understand.

Ellroy followed the Quartet with the Underworld USA series — American Tabloid, The Cold Six Thousand and Blood's a Rover. It was as cynical and conspiratorial as the Quartet, but it played out on a grander geopolitical stage, weaving in high-level American politics and international diplomacy from the years 1960 to 1973.

He's currently at work on the Second LA Quartet, which returns to the classic Los Angeles setting while rewinding the clock to the World War 2 years. The first two books, Perfidia and This Storm, are linked below.

Ellroy broke into the podcasting game in 2022 with Hollywood Death Trip, a podcast focused — what else? — on famous Hollywood murders. It's exclusive to Audible.

Perhaps the most famous collection of books by Ellroy, tied with the Underworld U.S.A. trilogy. Centers on the corruption and criminality of L.A. during it's golden age. Spans from 1947 to 1959.

More or less follows directly on from the L.A. Quartet, at least chronologically speaking. Has a much grander theatrical scale to it though, dealing with espionage and the dirty dealings of the United States as a whole. Several characters briefly mentioned in the L.A. Quartet also reappear in a much more prominent role. Spans from 1958 to 1972.

A prequel of sorts to the events of the first L.A. Quartet. The narrative focus shifts back down a gear from the grand stage set by the Underworld U.S.A Trilogy, once again focusing on L.A. However, a distinct difference lies in the fact that the novels all take place in wartime America. Many characters from the first Quartet make appearances as is to be expected. Spans from 1942 to presumably 1945.

Works by Ellroy with their own trope pages:

Other works by Ellroy contain examples of: