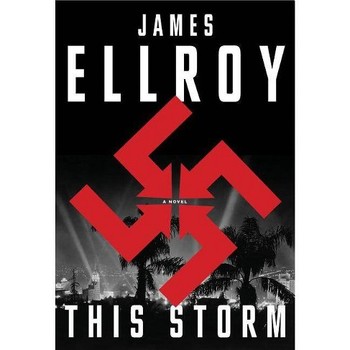 This storm, this savaging disaster...
Advertisement:

The second book of James Ellroy's second LA Quartet and the direct sequel to Perfidia.

Picking off right where Perfidia left off (literally - This Storm begins the very next day), This Storm sees four major characters dealing with the aftermath of the first novel's events. Dudley Smith, the Big Bad of the original LA Quartet, is recovering from Kay Lake's attempted assassination and preparing for his Army Intelligence posting in Mexico.

Hideo Ashida's Face–Heel Turn at the end of Perfidia has bought him Dudley's loyalty, protection from internment and a suite at the Biltmore Hotel for him and his family. Now thoroughly under Dudley's thumb and deeply in love with the Corrupt Cop, Ashida is dealing with his guilt over his role in the framing of Ax-Crazy (but innocent) drug addict Fujio Shudo for the murder of the Watanabe family.

Joan Conville, briefly seen in Perfidia as the distant object of Bill Parker's unhealthy obsession, causes a fatal accident while driving drunk. But she catches a break - Parker buries the charges and brings Conville on-board with the LAPD as a forensic scientist.

And then there's Sergeant Elmer Jackson, a corrupt cop who almost qualifies as a decent guy by the standards of the 1940's LAPD. Like Ashida, he's under Dudley Smith's thumb. Unlike Ashida, he thoroughly loathes Dudley and he's looking for a way to finally get rid of the infamous Irish cop.

When a massive rainstorm turns up a decade-old body buried on the site of a future golf course and Hideo discovers a small gold nugget on the corpse, Ashida, Dudley and Joan begin a private investigation into a famous gold heist from the early 30's. The three soon grow obsessed with the gold - an obsession that becomes even more dangerous once their investigation is overtaken by - and intertwined with - the murder of two racist cops at an LA drug den.

When not searching for lost gold, Dudley spirals deeper and deeper into a drug-addled fantasy life in Mexico, where he tries to run a string of rackets while forging an alliance with Mexican fascists, some of whom have a mysterious connection to the missing gold.

This Novel Contains Examples Of: